If you’re a Pinterest user, there’s a good chance that you’ve seen these guys pinned here or there. When I first saw a photo, I knew that I would have to try them out. I’ve done the cake pops and the cookie pops, but there was something about cute little pies on lolly sticks that really caught my attention. Tomorrow there is a pie auction fundraiser at my church (to raise funds for a Cuba mission) and so I knew it was time to pull out the mini-pies. 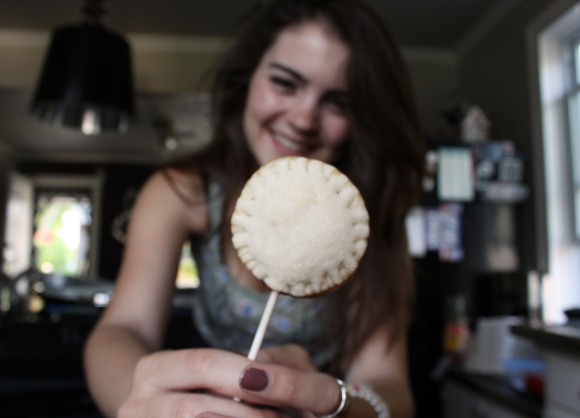 I didn’t really look for a specific recipe. Instead, I adapted a variety of different recipes and found a combination that worked. I found that they turned out pretty delicious, so I decided to share! I made my own crust and filling (from scratch) but you could just as easily use a crust mix or can of pie filling. I should pre-warn you that it does take a little bit of time and patience. It’s worth it though–how cute are mini pies!?

This recipe makes “Caramel-Apple” Pie Pops, but it can be adapted to make whatever flavour tickles your fancy!

Preheat the oven to 375 degrees.

PIE CRUST: In a medium bowl, stir together the flour and the salt. Using a pastry blender, cut the shortening in until the pieces are pea size. Sprinkle 1 tablespoon of the water over the mixture and toss with a fork. Continue to do so until the pastry can be formed into a ball. Do not over-knead the dough. Roll it out with a rolling pin on a floured surface. Cut out an even number of circles. Place half of them on a greased baking tray. Lay a lolly stick and sprinkle with a little bit of white sugar.

FILLING: Peel and cut the apple, placing it in a small bowl. Be sure to cut the chunks very small (so they don’t take as long to cook). Add the remaining ingredients and stir well. Plop a heaping teaspoon full onto each lolly-donned circle. Place the remaining circles on top and pinch the edges with a fork. Bake in the oven for 18-20 minutes. Remove them from the oven and immediately (but carefully) transfer the pie-pops to a cooling rack using a spatula. If the filling spilled onto your baking tray, I strongly suggest that you immediately soak the tray in hot water (it makes cleaning up SO much easier!)

Allow the pie pops to cool completely before picking them up. They can be displayed in a vase filled with chocolate chips or simply on a plate. Enjoy!

There you go! I just have a few notes for you. Firstly, I found that I left my pastry a little bit too thick so it overpowered the filling. Try to roll your dough fairly thin (but obviously thick enough to hold it’s shape). Also, when I assembled the pops, the filling juice poured onto my baking tray. Instead of creating a huge baked-on sticky mess, I decided to transfer the assembled pie pops to a different tray for baking. The filling still poured out a little bit, but it was a lot less messy. Finally, cut a couple of slits in the top circle to allow the hot air to release while baking. I forgot to do this and I found that there were a few air pockets in my baked pie-pops.

Oh, and one last note…don’t tell your dad you made them–they will be gone faster than an ostrich can run (and that’s the fastest running bird, you know). Happy Friday, friends!

What do you think? Cancel reply